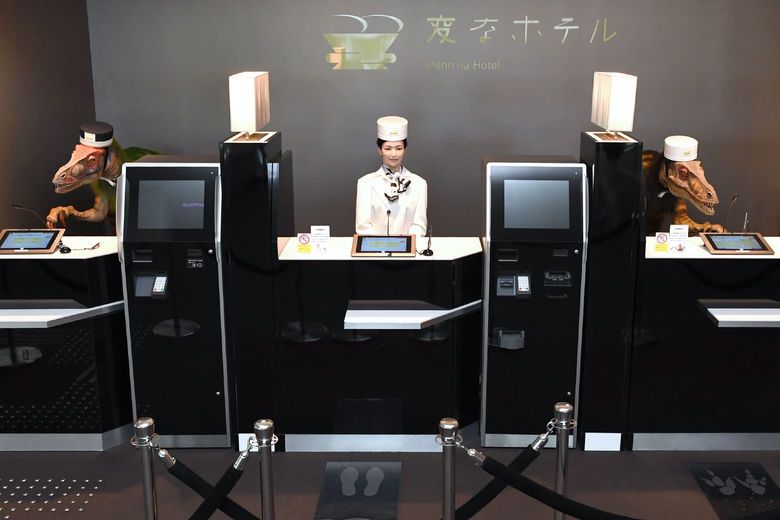 As the leader in Hotel Carpet Cleaning throughout the Northeast US, we like to keep our clients updated on the latest hotel industry news and trends.

When Captain Kirk or Mr. Spock needed information, they would hail the Enterprise’s computer, and the computer would respond to their request. In 1966, that was an amazing piece of science fiction. Now, with Siri, Alexa, and other devices with artificial intelligence, we all are figuratively standing on the bridge of the Enterprise, speaking to devices that are “listening” to us and fulfilling our simple requests. As the Internet of things grows, robots and other devices using artificial intelligence can handle a growing list of tasks, such as turning up the heat or air conditioning before a homeowner arrives from work, ordering a pizza delivery (and maybe unlocking the door for the delivery person), or playing Lion King soundtrack when they need some music. And in hotels, we now have physical machines powered by artificial intelligence and we have “robot rooms.”

Because the possibilities for robot applications have not been lost on the hospitality and service industries, we conducted an exploratory study of robot use among hotels in China, including the functions robots handle and whether guests are pleased with the robots’ assistance. As we explain here, the results are a bit mixed, but on balance the hotel guests we surveyed were satisfied with the robots’ service.

During calendar year 2017, we conducted a survey involving robot applications in 88 hotels, comprising 789 rooms (or robots) in 23 cities in China. Our data included well over 745,000 requests (or commands). The most common requests are (in descending order) turn the room (power) on all night, turn off the TV, turn the entire room off, and open the curtain. Closing the curtains and window screens for sleep were also high on the list, along with playing music. Looking at the list, this appears to be functions that you’d find when a guest is returning to a room for a moment in the afternoon or turning in for the evening. Indeed, we found peaks in the number of commands in the mid-afternoon, around 15:00, and at night, between 21:00 and 23:00. Morning is also represented, but it’s further down on the frequency list, with guests requesting that the curtains open, the TV turn on, and lights go on.

To get an initial indication of guest satisfaction with robots or artificial intelligence, we surveyed 94 guests in six hotels (including metro and airport), comprising 188 rooms (or robots). Our sample was split about evenly between men and women, and it skewed toward young travelers, with almost two-thirds being between 18 and 30. We found that these guests have high expectations for robots, including better living experiences, more convenient and customized services, and more interesting experiences. They also believe that staying in a “robot hotel” will be a cost-effective choice (although we also learned that guests are not so interested in paying a higher tariff to stay in a robot-supported room). Looking ahead, the respondents expected robots to handle numerous specific functions, notably, delivering food and goods, checking in and out of the room, and offering travel information and recommendations.

The travelers’ reported satisfaction levels were high. They found the robots to be responsive and gave high marks to the overall robot room experience, including making the stay more interesting, convenient, and customized. They also liked the idea that the robot would chat with them. One concern stated by some guests involved privacy, since robots have cameras installed.

So, how did the robots do? Not perfect, but not terrible. Guests were reasonably satisfied with the robots’ performance in turning the lights on and off, turning on the TV, and playing music. Satisfaction was less unanimous regarding the robots’ response in changing channels, moving on to the next song in a mix, or pulling back the curtain. Part of the problem here appears to be a malfunction, such as when the robot stops working correctly or isn’t able to follow an instruction. That said, virtually all guests rated their overall satisfaction with the robot room at four or five on a five-point scale. Moreover, almost everyone would stay again in the robot room, but (as we said) they were less interested in paying a ten-percent higher rate for that stay. As a side note, we found that—having experienced the robot room—nearly half of the respondents were open to the idea of purchasing their own robot-supported devices, and most of the rest were at least on the fence. Only a small group nixed the possibility of their own robot assistant.

In terms of guest acceptance of robot rooms, one research question that arises from this initial study involves which guests will welcome robots in their rooms and which are not interested. To address this issue, we propose to develop and test a “Technology Acceptance Model” for hotel guests. We expect the following constructs will contribute to technology acceptance: perceived adaptability (of the robot); anxiety regarding, familiarity with, and use of technology; perceived cost (of the room); social influence and presence; perceived usefulness, ease of use, and enjoyment of a robot; attitude toward robots; and intention to use the robot.

Managers were measured in their reactions to having their new robot “employees.” When we asked the management of 16 hotels to estimate the return on investment, their response was everywhere from zero to over 400 percent. With such a range, our suspicion is that it might be difficult to measure the actual return on this technology, and it may also be that different hotels have installed different types of robots, with various price tags. We found, for instance, that the average payback period for hotels in Hangzhong was two years, while Nanjing properties reported a payback period of barely two months. Hotels in Shanghai, Suzhou, and Xi’an fell between these two extremes, but these payback periods generally involved only a matter of months.

To go a bit deeper, we interviewed some of the hotel managers. We found that they viewed robot installation as something of a publicity stunt to attract guests, most of whom don’t select a hotel because it has robots (and, again, don’t want to pay extra for a robot room). The managers didn’t see improved profit margins from robot rooms, but they also didn’t see added complications from managing the robots, other than the occasional problem with the robots failing to complete a command (and thus incurring guest complaints). In the robots’ favor, the managers observed that children staying at the hotel enjoyed interacting with the robots, although older guests didn’t show much interest one way or the other.

Hotel stakeholders were somewhat fatalistic about the trend toward robot rooms in their properties. On the one hand, they expect to continue installing robots in more rooms, with the belief that they bring benefits to the guests. On the other hand, the stakeholders were not specifically calculating the benefits from the robots, and they couldn’t say whether the robots were boosting profits. In any event, the hotel stakeholders were convinced that artificial intelligence was a growing trend for future development.